By Jen Eramith bacteria, blood, ecosystem, guts, human body, Uncategorized 2 Comments
When I was a child, I was fascinated by the fact that our human bodies are roughly 70% water. When I first learned this, I walked around for a few days feeling like I could float. I felt like my blood was part of the ocean. I touched the water in the drinking fountain and wondered if I could flow with it down the drain.
(This amazing photo care of DeviantArt.com) 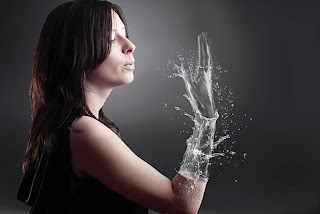 As an adult, I am fascinated by the idea that our bodies are made mostly of open space. There is such vast distance between atomic particles that the atoms that make all the objects in our world are less physical than spatial. From the perspective of quantum physics, our bodies are really just patterns of energy with the barest bit of matter being held in place. It freaks me out a little to really try to comprehend this, but I like the sense of possibility it gives me when I do.
Then today I came across something that freaks me out even more. Take a look at this story on NPR.

I’ve known for a long time that there are microbes occupying our bodies and helping everything work well. But I never considered that their combined number is more than my own cells. It’s one thing to know that I’m a walking, talking ball of mostly empty space with some water thrown in. It’s an entirely other thing to consider that most of the body I think I occupy is actually occupied by other life forms.

But then I thought about it for a while and realized this is just another reminder that we are so NOT alone. Even our bodies are ecosystems. It’s probably more accurate to say that my body is not “mine,” it’s “ours.” Just like the planet we live on and the communities we are a part of – they are “ours.” And thinking of it that way is the only way we’ll heal them.

Just as I did when I was a kid, I love the feeling that my body is bigger and more complex than it appears.  I love feeling like I'm part of something bigger.
Now if only I could stop getting the creepy crawlies when I think about all the other creatures living on my skin!
Previous post Next post